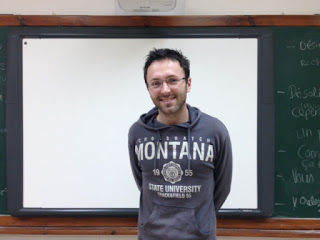 We: Why did you change country
?

We: Was it difficult for you
to change your life style from your home to another country?

Liam: In some parts yes and in
others no. For example the countries are quite similar in many ways but then
there are some different things. For example the eating times are different. We
have a small meal at 12  o´clock,  like a sandwich, then a big dinner
at 5 or 6 o´clock, but here it´s not like that. You have to adjust to small cultural
differences.

We: Did you have any idea of
what you were going to do here?

We: Did you know you were
coming to work in Vedruna ?

Liam: I didnt´t know anything
about the school until the day I arrived. I´m so lucky I got the job here. I
imagine if I had gone to another school maybe I wouldn´t be in this country
now. I´d probably be back in England. I love the school so much. All the
teachers, the students and the atmosphere here.

We: When you came here did you
have any difficulties with money or other things ?

Liam: The money not so much
because I don´t need money to be happy. I had many problems with the language
at the beginning but then I started studying spanish. It´s difficult  to
integrate in a country if you don´t know anything about the language but it´s
also so true that you start to learn very quickly. As I started becoming
more integrated in the country I started learning Catalan. The other
problem I had is missing friends and family. Sure, England is not so far away
but not being able to see your loved ones on a daily basis is hard. I miss them
a lot on special days like family birthdays etc.

We: Did you have any
difficulties to meet other people in Catalonia?

Liam: Mmm… no because the
school was very good. The school helped me because the first year I lived with
4 different families from the school, so, in that way I was able to meet people
quite easily. When i came here I didn´t know anybody in the country. All of my
family and all of my friends were in another country so I literally arrived not
knowing anybody! Thankfully catalan people are very friendly and so I was able
to make friends very quickly.